Our Mission:  Franklin Community Church is a beacon of faith, embracing each individual and nurturing the development of Christian discipleship.

What this means is that our pastors are ordained and appointed by the United  Methodist Church and we participate fully in all the mission projects of the world-wide denomination.  However, many of our members come from various faith backgrounds and we cooperate with  many different denominations.  Like the United Methodist Church’s motto says:  We have “Open Minds, Open Hearts and Open Doors.”  We are a diverse congregation, ​​but are united by our common love of God and respect for all of God’s children.  There’s a place here for you!

The Village of Franklin was first settled in 1824.  Over the next 10 years, more settlers gradually arrived, and Methodist circuit riders held camp meetings in the area in 1931 in the barn of Elijah Bullock, one of the first two settlers.

On August 2, 1840, only three years after Michigan became a state and when the village had grown to 100 people, a small group of seven people established a Methodist Protestant Church in Franklin. They did not have a building.   For the first 20 years they met in barns, homes and in an old log school house that was located on the village green on Franklin Road, near the historical marker sign.  The church was first served by Rev. Laban Smith and soon some associate pastors who rode to churches on the Franklin Circuit, including Orchard Lake, Waterford, and Three Mile Lake.  One of the associates was Pitts C. Lanning, who later went on to become a Superintendent of the Circuit and later returned to Franklin and made an important difference in the future of the church.

Things went well in the early 1840’s, but then attendance began to wane and the class disbanded for a while but was still part of the circuit.  In February 1858, Rev. Pitts C. Lanning returned to the log school house and preached a series of sermons that inspired people to turn to faith God, including former members who had left, a few from other churches, and many brand-new new members.  That summer (1858) there was much conversation about building a church, and that autumn Pitts C Lanning was appointed to be the pastor of the reviving congregation.
​
In February, 1860, the Trustees of the church met in a home by kerosene lantern and made the bold decision to build a church.  They bought land on German Mill for $50 and by fall the first church was built – a one-room square building with stoves along two walls and the altar area in the southeast corner.  Total cost was $210.  The church was completed that fall, but was not dedicated until 1863, when it was called “The Church of Franklin.”   To raise money to care for the building, the ladies of the church sold chicken dinners.  The pastor was often paid in fresh vegetables and eggs, as well as special collections. By 1873 there were 60 members. In 1877 they changed the legal name to The Methodist Protestant Church. 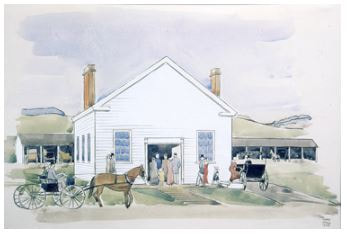 From 1900 top 1911 membership gradually declined to only 24 members and the church was without a pastor for two years during World War I, and for a time no services were held.  In 1918 Franklin Methodist Protestant Church appealed to the pastor of Central Methodist Episcopal Church in Pontiac for help, and as a result, his associate, Rev. Edward Dunlavy came to Franklin. At that time, the church formally became a Methodist Episcopal Church, well before the reuniting of those two Methodist denominations in 1939.  Soon a parsonage was built for Rev. Dunlavy, his wife Luella, and their three daughters, and a highly successfully period of growth began for the church. The records show that Rev. Dunlavy in the 1920’s began to hold “minstrel shows” that included duets, jigs, and accordion music.

The old church building on German Mill was used by Franklin Church for 96 years, 1860-1956. Over the years a number of additions were made, even in the last six years before the current church was built. Indoor restrooms, a social hall, and a recreation room were added in the old church during the 1950 renovation. The windows in Searls Hall in the new church were planned to look like the windows of the wing added in 1950 in the old church, which is not surprising, since the same architect  was used for both the addition to the old church and for designing the new church.

In 1956 the new church on the corner of Wellington and Normandy was completed, built on land donated by G.W. Smith. The construction must have taken longer than expected, because early weddings are reported to have been held amid signs of construction on the inside and on the outside of the church. The fellowship hall was not added until 1964, and it was renamed Searls Hall in 1975 in honor of beloved pastor Rev. Robert Searls.

Franklin Community Church does not have the words United Methodist in its name because the people of the church and of the village view it as a church that is there for all the people.  Franklin is the church that the community calls upon to lead Memorial Day Services, to throw out the first prayer for baseball season, and to provide space for large community meetings.  However, we are indeed a United Methodist Congregation that serves Christ as a beacon of faith and is welcoming in the spirit of grace that is common to United Methodist Churches everywhere.
​
The church has a heart for mission and supports a wide range of mission projects in places like Detroit, Pontiac, and even Zambia, Africa. Membership had been declining, but in the last year we have seen a large number of new families with children finding their way to our doors and choosing to join us.   This occurred after a congregational visioning session in the fall of 2013 led to the formation of our FBI: Future-Building Initiative. As the congregation sought to understand its unique gifts and calling as a congregation, they prayerfully developed five initiatives around programming for children, mission, congregational care, awareness, and community relationships, which have been diligently followed and which have resulted, by the grace of God, with wonderful first fruits that are beginning to appear. We are optimistic about the future, although we still have much work to do. 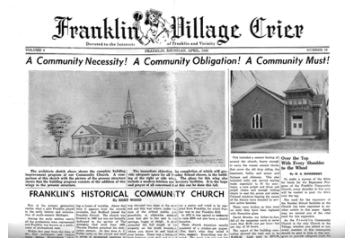 We created a mini-museum in February, 2015 that resided in the parlor for several months. We held a wedding reunion in May for anyone who was ever married at our church that was attended by 100 former brides and grooms as well as many of their family and friends. We discovered that the artist who had built our altar cross in 1956 had always wanted to add a dove to the center of the cross, so we received that gift from her on Pentecost. On August 2 we celebrated our historic walk from the old church to the new church. A float of the church was built to participate in the Franklin Village parade on Labor Day and in October we held a talent show and raised money to be donated to Missions.

In July of 2016 Rev. David Huseltine became our minister. A new parsonage located in West Bloomfield was purchased at that time.

In the fall of 2016 the 60 year old windows of the sanctuary were repaired and storm windows were installed. In January 2017 the obsolete audio visual system was replaced with a new state of the art system.


Those Who Have Entered the Ministry From Our Church:
The Rev. Robert Koch
The Rev. Stanley Sutton
The Rev. Ann Cowick Hampson
The Rev. Harold Morse
The Rev. Brent Webster
The Rev. Heidi Schnaufer Reinker 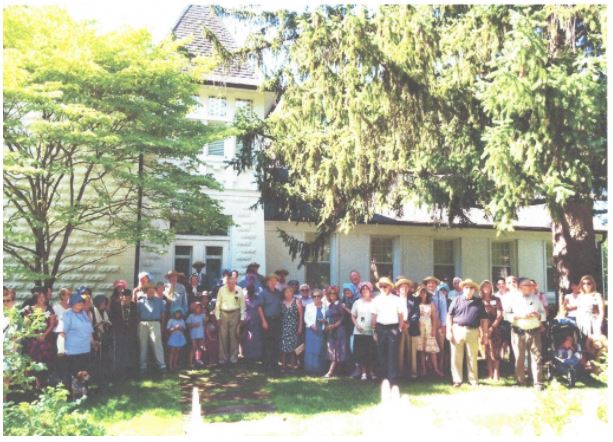